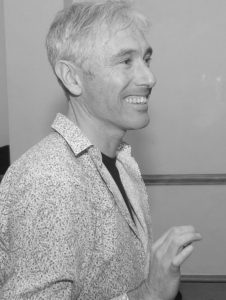 I’ve been singing all my life since my church organist grandfather got me belting out hymns and ragtime songs while he played the piano when I was tiny. I was also a cathedral choir boy between 8 and 13 and a choral scholar at 18. Then I backpacked around Africa and fell in love with traditional African music, particularly the amazing harmony styles of the Baka pygmies and the choral traditions in Malawi and Botswana.

After two year’s music fieldwork in Cameroon for an Anthropology Phd where I  learned to play traditional xylophones I moved with my family to live in Jerusalem and there was fortunate to play with local musicians from many musical traditions and also to learn Arabic scales and vocal styles from local teachers.

Coming back to UK some 20 years ago now I have since navigated an eclectic solo singing career Medieval, Early and Contemporary classical music.

In addition to singing as a member of The Shout, Arabo-Andalusian group, Joglaresa, and world music band, Korasong Radio, I sing and record regularly with the Society of Strange and Ancient Instruments and the Voice Project Quintet.

Recently, I sang and performed in ‘As You Like it’, with original music by Orlando Gough, at the National Theatre, and have just been working with composer Melanie Wilson on a new choral theatre piece about population and the environment called “Live Long and Die Out”.

During 2016 I directed the music for the Globe Theatre’s world tour of ‘The Merchant of Venice’, starring Jonathan Price across USA and China. Last year I also musically directed their production of Othello and performed solo in various international arts festivals as well as singing with Lisa Gerard (of Gladiator fame) and “La Mystere des Voix Bulgares” on their new album.

During the summer of 2018, I was back at the Globe again, directing the music for the new production of “Eyam” directed by Adele Thomas.

Along the way in UK, I have always also directed community choirs after being persuaded by Nick Prater to take on his New Forest Choir when he moved away to Devon in 2003 and I always get real pleasure teaching music to large groups of people who are doing it simply for pleasure.

Singing with laughs is for me always the best medicine!

If you would like private singing lessons in either Bristol or Salisbury then contact Jeremy direct on: